Just under a year ago, StadiumTM introduced its HVM Solutions Service. The company offers a bespoke package which empowers organisers the opportunity to hire industry leading HVM solutions, which includes all aspects of installation and removal.

Over the past year, the service has grown in demand. Sunday October 21st, marked the company’s 250th deployment at the NFL at Wembley. The very first deployment was at Burnley FC on November 18th, 2017. 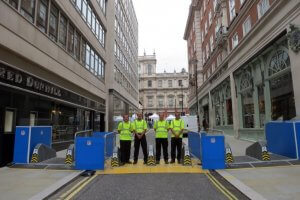 Event spaces are becoming increasingly versatile and multi-functional. Stadiums are being granted permission to host music events in addition to their sporting fixtures. And public areas are hosting community events, often in a closed roadway.

StadiumTM has deployed to a variety of high profile locations and events and have also provided HVM to its existing long term clients. It has been the mission of David McAtamney, Managing Director to integrate HVM into the overall events services package. Since 2016, when the threat of Vehicle as a Weapon attacks became very apparent, he felt a moral obligation for the company to pursue this route as StadiumTM through its road closures in effect create crowded spaces which in turn requires protecting.

Over the past year locations and events where the HVM Solutions team have deployed includes:

The service StadiumTM supply is unique and is currently a finalist in three awards, both regionally and nationally. The HVM Solutions team has been recognised and is shortlisted for Counter-Terrorism Project of the Year by the Security & Fire Excellence Awards.

StadiumTM is extremely proud of the work they carry out, here’s to the next 250 deployments and beyond!