Featured in the Dutch Press, were Cova’s CSG 10850 crash rated bollards during installation at Rotterdam Central Rail Station in which they provide a ‘ring of steel‘ around the famous building. This large project was secured earlier this year by Cova’s Netherlands partner, and the full installation is due for completion 2018. “The train station is on a list of the government buildings that need extra protection”, stated Frank Stevens, Project Leader from public safety Solutions firm Pijnacker. He continued, “The poles (bollards) are a lot bigger and thicker than the poles that are already in the front and behind around the train station, where the ornamental stones stop. They are underground on a horizontal grid, making them difficult to drive far (into).” In other areas of the city alternative anti-terror measures have been taken following the attacks in Barcelona and Nice with trucks. For a video of the contract see http://bit.ly/2BnzR5o. 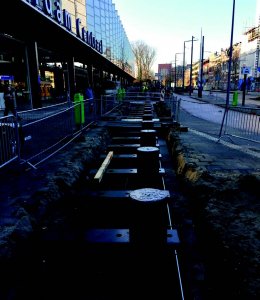 Karen Deacon, Marketing Manager at Cova Security Gates explained, “An ideal solution for town centres, historic sites and for protecting public spaces are our shallow foundation CSG 10800 series static bollards, as they provide an effective solution to prevent a vehicle attack, protecting both pedestrians and property. They are becoming increasingly popular around international key landmarks as they have a minimal impact on the environment’.

Due to continued growth and business demand, Cova have introduced a new team of experienced experts right across their business – just at a time when demand for their bespoke high quality perimeter security products are at its highest.