Where a difference of opinion breeds so often does the ability for civil unrest to raise its head. Often when this conflict breaks out into civil unrest a small percentage of the population uses the chance to loot stores. Causing not only millions of USD of damage to the stores attacked but also the loss of stock and closure of many businesses with lost income. 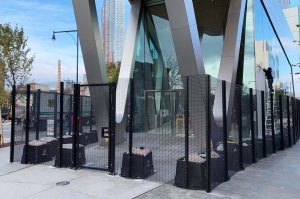 Whilst so far, away from the ever-growing Social Media and the news channels; the Presidential Elections haven’t been subject to similar widespread civil unrest, a number of companies across  New York City and Washington D.C have looked at protecting their property and staff in the event that it does turn. Due to the nature of civil unrest and the ability of it to erupt with very little notice, these companies wanted to plan and deploy a different range of solutions.

Many of the high- end 5th Avenue stores opted to board up the store and any access routes, whilst this presented a barrier, the speed at which people could gain access to the store if they tried is short.  Boards can be ripped down and used as barricades against the police. This has repeatedly been seen along with bike racks and other street furniture.

However, another iconic store on Fifth Avenue decided to opt for a solution never seen before in the United States of America. Through the JGW Group, the USA arm of CLD Fencing Systems, almost 1000 ft of FenceSafe SR1 was deployed overnight directly into New York City.

Being the first time the Temporary Security System with a guaranteed delay against manual forced attack was seen, it generated both local and national coverage. The system is the only LPS 1175 Security Tested and Rated Temporary Fencing system in the world. Designed to give a minimum delay against attack with tools such as wire cutters, screwdrivers, and hammers it is free standing so does not require any damage to the ground.

The results of the presidential election are still causing much controversy, however, one thing is for certain; FenceSafe  SR1 will continue to protect the American Retail Sector for as long as it is needed.