Taking their Securus (AC) SR2 Fencing system, that had previously been tested and certified to LPS 1175: Issue 7, CLD Fencing Systems started to look at how the system could be off-site assembled in the manufacturing process and then shipped for a minimum two-person install. 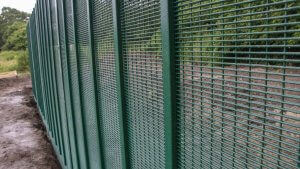 Using advances in the fixing systems from the FenceSafe SR1 Security Rated Temporary Fencing System, the new Permanent perimeter solution has reduced the number of visible external fixings to just 11. This means all the fence cassettes, that includes a double layer of mesh; can be manufactured at CLD’s head offices in Sandbach, Cheshire before shipping around the world.

Due to this, CLD Fencing claims that installation is at least three times faster for contractors on site. CLD Fencing Systems have even manufactured a new lifting system which allows quick release of the fencing cassette without the need to work from height. With a cassette weighing just over 165kg for 2.4m high and 203.05kg for a 3m, this makes installation quicker and safer when using mechanical lifting devices.

At the same time, for sites where mechanical equipment are unsuited the high-security fence can also be supplied for assembly with a reduction of 46% less fixings than the equivalent Securus (AC) SR2. For more information please visit www.cld-fencing.com